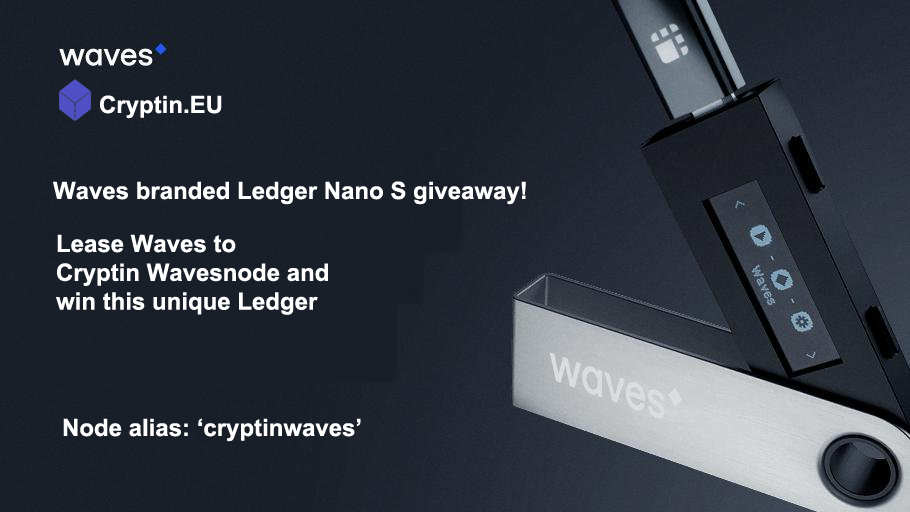 To celebrate the Waves node 1.0 release and the fact that Cryptin has been running a Waves Platform fullnode for almost a year now we are giving away this unique Nano Ledger S.

Another reason is we would like to thank everyone leasing Waves to our node. In a year we’ve grown to be a top 20 Waves node and that’s all because of the community leasing their hard earned Waves to us!

For a while now a brand new Ledger Nano has been in our possession and has been unused ever since, as we already had a hardware wallet. This is not a normal Ledger but has been branded with the Waves Platform logo (inscribed in the metal).

In order to make this giveaway as fair as possible we’ve setup a few rules:

We will draw a winner from all participants on monday the 19th of august 2019 and be in touch! Good luck!

How do we draw a winner?

We will draw a winner from all Waves addresses we get from the replies. After we drew a winner we will manually check if;

Or use the alias: cryptinwaves

Cryptin started out as an informative website on all cryptocurrency topics. We offer information, guides and a glossary on a broad spectrum of topics. As of august 2018 we also started a Waves node.

Contact us through our contactform or our social media accounts.